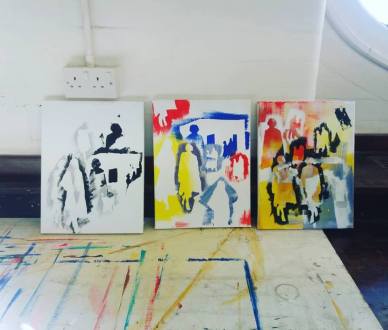 Trying to layer the figures in the paintings and build up a surface. These paintings were well liked. However, there seemed to be something which they were fundamentally missing. Looking at ways of adapting surface and deciding to take inspiration from last year’s ideas of using coloured shapes used in roof top and School of Art studio paintings.
Looking at geometric colour compositions, taking inspiration from artists such as the Russian painter Popova and other students at the School who had worked in this way. The sheer lines disrupted the surface and brought though more colours to play with. I wanted to escape the primary basis of the existing surfaces. I also began another serious based of some photos of sailors from the 1950’s following same process.
These six paintings became a bit off a project for a few weeks and the building up of layers and interaction of colours a key focus. It was difficult to know