Silhouettes are a cheap and simple way of creating a portrait, popular in the 18th century, provided an affordable means to get portraits made. The silhouette is not however an outline which is what was created to a certain extent. An Outline depicts the edge of an object in a linear form, while a silhouette appears as a solid shape.
‘Aristocrats & Fedora Hats’ August 2018 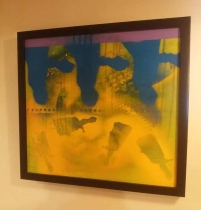 The Reason to look toward Silhouettes is they create an impression of a figure without the necessity to draw them. Using a process that had developed on one of my summer projects ‘Aristocrats & Fedora Hats’ I created stencils using photocopy’s of the images and painted around them developing what you see below, beginning to layer these images and create outlines rather than the solid Silhouettes ‘  allowed the composition to be more flexible below is one of my early attempts at this process based of the Great Yarmouth women that can be seen in previous post.